It is well-known that mothers are prone to being fond of sales and the acquisition of tchotchkes. For my mother, this urge is enacted at the book outlet at the Menlo Park Library, a formidable golden trash heap of endlessly varied tomes for $1.

Recently, she brought home Luca Turin and Tania Sanchez’s Perfumes: The Guide. Although I was no wearer of perfume (but neither is she; sensitive Irish skin), she insisted that I flip through it.

I expected to be bored, because after all, how much could there possibly be to say about floral notes and white musk and Indian jasmine? Surely not an entire book’s worth?

But I was wrong. This book is one of the most entertaining and eye-opening reads I’ve set eyes on in years. To Turin and Sanchez, scent is as complex and nuanced as music or visual art, conveying fully sculpted concepts that can be executed masterfully or terribly. In fact, the analyses of fragrances that they find disgusting are often more entertaining than the ones they find ingenious. Mostly, I’m impressed by the authors’ ability to ignite sentiment and curiosity for something I previously regarded as garish and grandmotherly. (Please disregard highlighting below, I had to search through Amazon’s “Look Inside!” feature to find certain passages.)

I ended up becoming so enchanted by this elevated concept of perfumery that I purchased a couple for myself—Hanae Mori’s Butterfly and Lolita Lempicka. As described below: 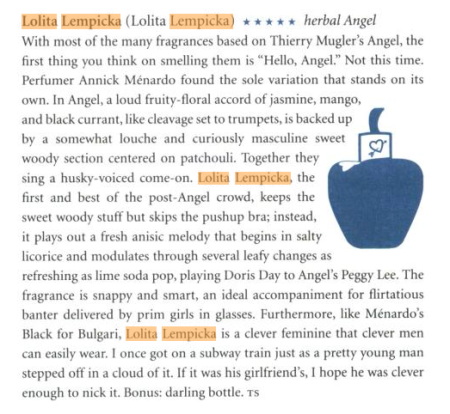 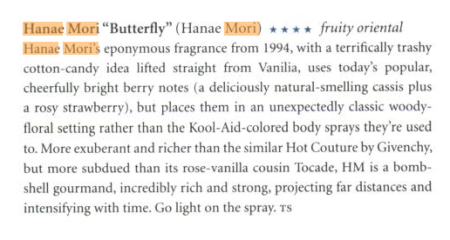 I’m quite happy smelling like a “terrifically trashy cotton-candy idea”—but I do go light on the spray. To me, this book is a shining example of how engaging, humanistic writing can transform virtually any topic from mundane to magical. As a rambler, I find that idea comforting. And for the record, I like Tommy Girl.